Raven’s Nest and Whistler Blackcomb were recognised for, “being a role model for progressive, forward-thinking business by offering a wide variety of cruelty-free options, including delicious vegan food at it’s all-vegetarian restaurant, Raven’s Nest.” You can read all about it on PETA’s website here.

Raven’s Nest is located on Whistler Mountain and offers a delicious range of vegan sandwiches, such as the Gardein Beef and Daiya Cheese meatball sub, as well as a tofu scramble wrap, vegan mac’n’cheese, soups, stews and salads and a decadent vegan chocolate brownie.

It has won the hearts and stomachs of many die-hard meat eaters, who have come into the restaurant not knowing it is vegan and given it a try. The hearty, tasty food has opened many minds to how good vegan food can be and busted the myth that it is bland and boring.

Our warmest congratulations go to the team behind Raven’s Nest – Kristine Leise, Wolfgang Sterr and Mike de Sousa. They have so much passion, dedication and love for creating a place with cruelty-free, environmentally-friendly dining options and have put so much work into doing so. They totally deserve this award!

The Whistler Question also wrote about the award in this week’s paper and Wolfgang Sterr was feature in the Toronto Star talking about Raven’s Nest earlier this year too. 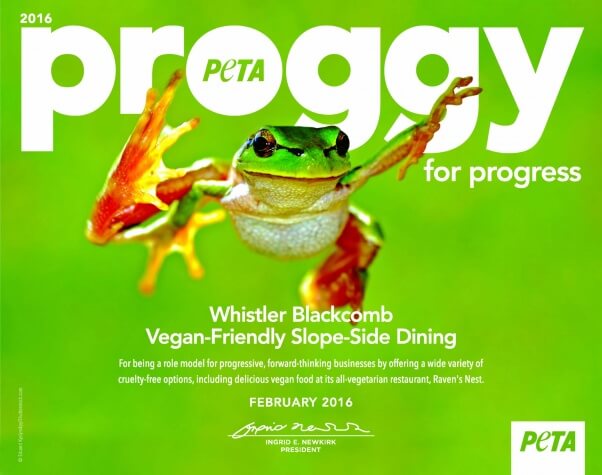 New roasted beet wrap, with Gardein meatballs and a quinoa salad on the side.

Copyright © 2022 Create a free website or blog at WordPress.com.